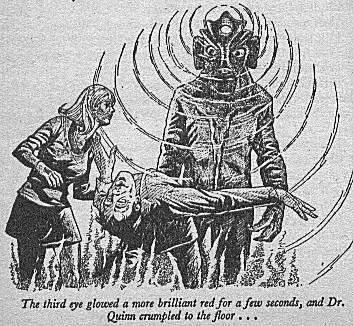 In Episode 3: Ape Pesticide, the boys discuss Kelvin’s introduction to Doctor Who – the Third Doctor story Doctor Who and The Silurians, chat about their favorite two part Doctor Who serial, and settle the age old debate: Which is the best Doctor Who Western of all time – The Gunfighters or A Town Called Mercy? Oh, and just to class up the joint, Pat reads his first ever Doctor Who inspired poem!*

As always, if you enjoy this episode, let us know! Email us, write a review on iTunes or like us on Facebook!

*Pat also makes several factual errors in this episode: 1) Nell Campbell (from the film Jubilee) plays Columbia in Rocky Horror, not Magenta (although Patricia Quinn, who does play Magenta, appears in the Seventh Doctor TV story Dragonfire, and the Big Finish audio Bang Bang-A Boom!). 2) Jubilee was Derek Jarman’s second feature film. 2b) It came out in 1977. 3) The second US Pinnacle Books novel was “The Doomsday Machine,” not “The Cave Monsters,” although they were both written by Malcolm Hulke. 4) The name of the composer is Tristram Cary, not Tristram Vary.

It’s likely Kelvin and Joshua also stated many untruths during this podcast but they’re too lazy to fact check themselves. Ignorance is bliss!