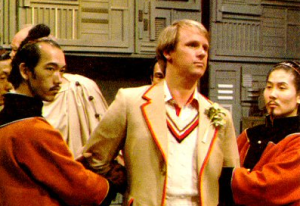 In Episode 9: Bowling A Chinaman??? the boys get philosophical about regeneration, politely debate the merits of the Fifth Doctor story Four To Doomsday, solicit a second opinion on Four To Doomsday from Joshua’s 10-year-old daughter and delve deep into the obscure world of Doctor Who spinoff media for a Death Zone battle between the classic ’80s comic strip arc Voyager and the Big Finish audio adventure The Maltese Penguin, both featuring the Sixth Doctor and his comic strip companion Frobisher.

Show Notes and Other Tidbits
-Joshua is excited about the upcoming Big Finish box set UNIT Extinction!
-Pat is chomping at the bit to read the Lethbridge-Stewart novel series!
-Kelvin is intrigued by a different upcoming Big Finish box set The Last Adventure!
-As discussed in this episode’s Death Zone round, you can download the Maltese Penguin here! and the Voyager graphic novel here!
-More information about the Twin Cities Doctor Who Convention CONsole Room!